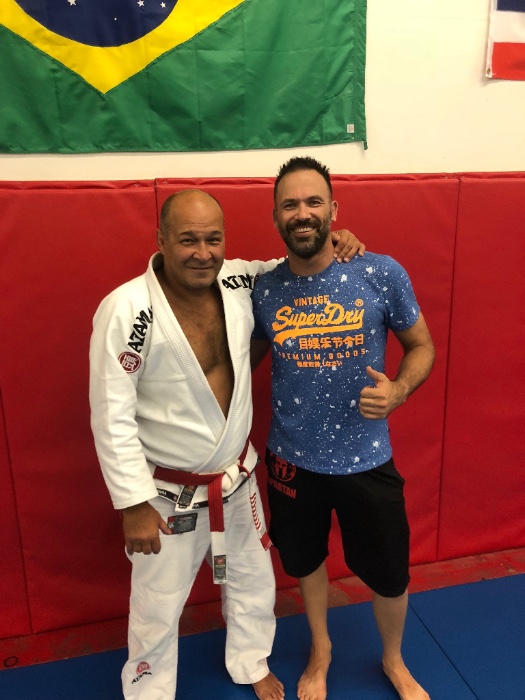 About 1 year ago I decided to compete in the World Masters tournament in Las Vegas. I know I know….BJJ has a lot of world champions blah blah. But it was more than that. When you participate in a combat sport there is always the question of how good you are or if you have improved. My experience went a lot deeper than just the physical aspects of the sport.

The first major challenge was to make a decision and stick with it. No backing out. The date is set. Too many people commit 30% to competing. Works too hard. Life gets in the way. We all have convenient excuses when we need them. When I decided to compete I told my coach. That way I had to stick with it as I did not want to be “just another mouth”. There were days when my training partners would really put the gears on me. And it was tough. But you don’t quit because your toe is sore. You keep going. Some people are motivated internally. Some are externally motivated. You need to find your motivation for competing.

The second challenge is which weight class to compete it. As a Master 4 (Age 45) I wanted to compete where I was comfortable and not overly vulnerable to potential injury. I initially competed in the Super Heavy category however in one of my warm up competitions in New York I realized i was just too small to be competitive.  I had to change my strategy as I realized that the people I would be up against would be bigger and stronger. I had to drop weight. Dropping weight is difficult and requires focus and discipline. I decided to enlist the help of Daniel Thiessen at Radix who put me on a strict diet and conditioning regime to drop weight. The drop was difficult and sometimes you just don’t have time to eat. But you have to. Your health is first priority.

The third decision is how bad do you want it. I am fortunate enough to have a lifestyle that allows me to train as often as I need to. You cannot expect to compete in a tournament of any magnitude if you are not willing to put in 2-3 hours a day. Yes, each day. If you aren’t sparring you are reviewing your videos. Reviewing others. Refining your game plan. It’s all time consuming. It took me over 10 years to be able to live the life to train and now I had a motivation, strategy and a team to help me achieve my goals.

The fourth decision is your game plan. What are your strengths? Weaknesses? How good are your takedowns? Can you handle “pressure”? Do you quit easily? All of these must be exposed in the preparation for a tournament. Too many students “want to roll light”. No way. You want to win? Learn to manage your brain and thoughts in a tough match. Get the baddest toughest guy in the class and roll with them. No one cares if you have a sore toe. Get tough and push through it. The mental aspect of preparation is a tough one and often the competition is less of a challenge than what your brain makes it out to be. One technique I was taught was to remember than not one person in the crown (barring your loved ones…) actually came to see you and win or lose they won’t remember you. Its a sobering thought.

The competing process also helped me to pick my partners better. At 45 I cant afford to be injured again. I am not being picky – just cautious. I find that younger athletes are too fast and over zealous. Training with purpose does not mean that each roll is an ADCC medal match. Each match has a clear objective. I didn’t just “roll” for fun and to be honest the fun of rolling did leave me for a while. Rolling with a purpose and a plan is hard when your body is sore and you are hungry. Or you have just spent 60 minutes on a rowing machine. But this mental toughness is critical to competing and staying healthy in the sport.

Over the course of 8 months I competed regularly. I attended class 5 times a week. I did supplementary conditioning 2 times a week. I had a setback of an abdominal hernia 9 weeks before the event which resulted in me having abdominal surgery. I honestly did not want to carry on. The recovery was difficult. That did not stop me. I was back on the mats 2 weeks later. Overall I started to change. I lost 30 pounds. I became stronger both mentally and physically. I lost my fear. I developed a confidence in my ability. You also see each roll for what it is. It’s a moment in time where you compare your tools with your opponent. It’s nothing more than that.

I went to Las Vegas 2 weeks before the event to train at altitude and in the heat.

As i reflect on the preparation and competition the past 12 months are more than just winning a tournament. I made new friends and developed a strong bond with my training partners and coach. Winning would have been been nice but I would not want the result of the tournament to ruin the experience I have had.

I changed my body and learnt to feed myself properly. I now respect my body for what it can do. I know my limits and I am nowhere near them.

My jiu jitsu is many times better than it was when I started this journey. I have added new dimensions to my game and I have developed a new respect for the basics.

I had an opportunity to train and talk to legends of the sport. My respect for their craft and ability knows no bounds. I am humbled by their openness to share their knowledge with me.

At the end of the day competing requires a certain type of commitment. It’s ok if you can’t do it. There are loads of great BJJ players who don’t compete. Competing is really just the icing on your BJJ cake. The training, relationships and human spirit are the cake. That’s what’s important. Win or lose this journey has made me a better player and a better person. If you decide to compete make it more about the stuff other than the medal. You already are a champion for getting on the mat.

If you do compete but miss class and lose do you take the blame or do you throw it at your coach?

Competing won’t make you a better player or person. The process behind it will. Jiu Jitsu, like life, has people that you will get on with and people that you won’t. You have to deal with it. If your ego is so fragile that you won’t roll with the guy that always “applies pressure” then he is the guy you have to train with more often because that’s what jiu jitsu is. When class is over you don’t have to be friends. But in that moment that guy is your best friend because he is there to make you a better player. Respect that.

So I did not win the competition. Does it hurt to say it. Yes it does. Will I be back? Absolutely. The nature of competition has changed the reason I compete. It’s not about the medals. It’s about knowing that I can face my fears. It’s facing my fear of losing in front of loads of people and being ok with that. But more than that I respect people who don’t compete too. It’s a choice you make and no one should force you to it if you don’t want to.

We would like to congratulate Chris Wharton-Hood for fiercely competing at the World Master IBJJF Jiu Jitsu Championships in Las Vegas on August 22-25, 2018.

The dedication, hard work and perseverance that Chris has shown over the past year has been truly inspirational.  Both him and his family have immersed themselves in the BJJ lifestyle and we are so proud of all of them.